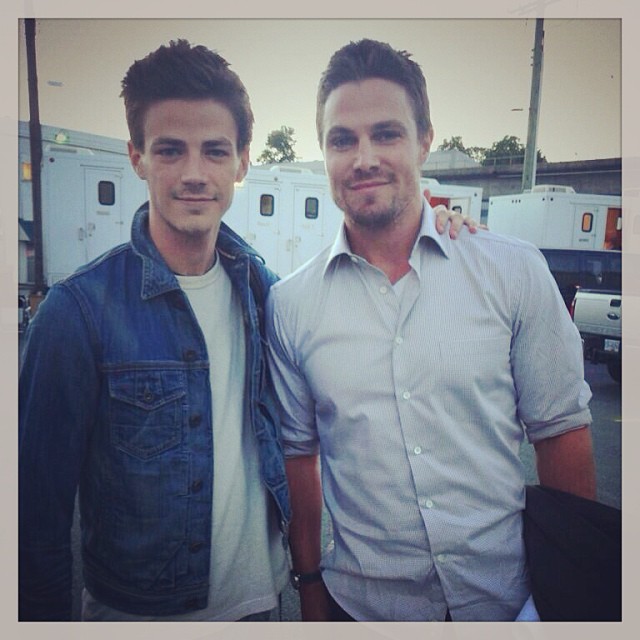 Grant Gustin will be debuting on Arrow as Flash on tonight’s episode, beginning a two-episode arc. The Glee alum plays Barry Allen, a “genius scientist who eventually turns into the speedy superhero simply known as Flash.”

“He’s the opposite of Oliver in a lot of ways,” explained Andrew Kreisberg, one of the shows EPs, “Barry’s outgoing and funny, a little bit unsure of himself and smart and sort of a squeaky wheel. The contrast between Stephen [Amell] and Grant is both comical and fun and has been really great to watch.”

Looking as innocent as Gustin does was, apparently, a big deal to the show’s producers.

“The thing that was important to us was that he really should be a contrast to Oliver and to Stephen. Stephen is the traditional square-jawed, muscle-bound hero,” Greg Berlanti told the press, “That works really well, because he needs all that. One of the things about Flash is he’s a random guy who gets struck by lightning. He needs the bolt of lightning to be a hero in a way Stephen doesn’t.”

As for Grant Gustin, he also had a piece to say about his character, who is “so much more likable” than Sebastian, the mean boy from Dalton Academy who he has played on Glee.

“I hadn’t done anything like that,” Gustin said, “I would be his friend. I hadn’t had the opportunity to play a character I would actually enjoy spending time with, so that’s nice.”

On tonight’s episode, the geeky scientist will head to Starling City to help solve an “unexplained robbery” that occurs on Queen Consolidated, the company owned by Oliver Queen.