On June 10 at 9 P.M. HBO will begin its Summer doc series featuring ten films to be aired every Monday through August 12. Here’s an overview of each documentary to expect from HBO. “Tells the story of Nadia, Masha and Katia of the feminist art collective Pussy Riot.”

Pussy Riot is a Russian feminist art collective/punk band based in Moscow that was founded after Vladimir Putin was given a third term in 2011. Directors and producers Mike Lerner and Maxim Pozdorovkin follow the three through interviews with the members themselves, family and the defense team in addition to the trial in which they were tried for their 40-second “punk prayer protest” in 2012.  The band’s guerrilla performances have cultivated a new sense of Russian society and garnered the support of Amnesty International, Sting, Paul McCartney, Yoko Ono and Madonna, all of whom have spoken out in the defense. Mike Lerner tells HBO, “The story of Pussy Riot is about a lot of things: politics, religion, national identity, gender equality, the nature of freedom and the enduring power of punk rock.” Pozdorovkin adds, “The fact that their 40-second performance inside the Christ the Savior Cathedral could provoke such great controversy reveals a lot about Russia today.” The film was an official selection of the 2013 Sundance Film Festival where it received the World Cinema Documentary Special Jury Award for Punk Spirit.

This film, written and directed by Liz Garbus, will feature the talents of Evan Rachel Wood, Elizabeth Banks, Paul Giamitti, Oliver Platt and Uma Thurman among others as the intimate details of Monroe’s life are revealed. The readings are accompanied by archival footage, photos and recordings in addition to dramatic readings of passages by Norman Mailer, Gloria Steinem, Billy Wilder and Truman Capote. The film follows both her tumultuous personal life and career path up until her death on August 5, 1962 at the age of 36.

“Heartwarming profile of several young participants in the Miss You Can Do It pageant.”

Abbey Curran started Miss You Can Do It on her road to the 2008 Miss USA Pageant. Not only did Curran start her own pageant for young girls with disabilities while on the way to Miss USA, but she did all of this with her own disability, cerebral palsy. Director and producer Ron Davis went to Kewanee, Illinois, Curran’s hometown and the home of Miss You Can Do It, to follow Curran and her contestants. The film follows several young girls such as Tierney, a five year-old with spinal muscular atrophy type II, Tasha, a 14 year-old with cerebral palsy, Tasha’s sister Kenna, who has intellectual disabilities, and Meg, who has Down syndrome to name of few of the heartwarming contestants. The safe environment offers a chance for these girls to shine and feel good about themselves. Curran hopes that the girls will leave thinking, “I just did something amazing, something that not very many people get to experience.”

“Follows three young public defenders who challenge the assumptions that drive a criminal justice system strained to the breaking point.”

Director and Producer Dawn Porter follows three young lawyers in the South as they prepare for trial. These young men and women are dedicated to their jobs. Travis Williams is so dedicated that not only does he put framed copies of “not guilty” rulings on his wall, but he tattoos the name of every defendant whose case he has lost. Brandy Alexander says, “Trying cases is an adrenaline rush, and when you win there’s a high. But that is not the average day of a public defender.” June Hardwick of Jackson, Mississippi says, “It’s an honor for me to represent my clients.” These public defenders work with low pay, staggering student loans and the stress of knowing the horrific crimes of which their clients are accused. The film follows through each of their cases and the many hardships they must face along the way. “Takes a deeper, wider look at the dangers of hydraulic fracturing, or fracking.”

“Gasland Part II” comes as a sequel to “Gasland”, which was released by director Josh Fox in 2010. This film is a followup that looks into the long-term repercussions of this dangerous process. Fox looks particularly at people around the world who say that their lives have been irreparably altered by problems from poisonous water to earthquakes to neurological damage. The film reveals the impact that this process has on a global scale and the many surprising effects that it is having on the surrounding communities.

“A jaw-dropping story of one unforgettable athlete, Kevin Pearce.”

Kevin Pearce is a snowboarding champion who is finally coming off his most successful season by challenging his friend and rival Shaun White. Director Lucy Walker follows Pearce on his ascent until disaster strikes on December 31, 2009 in Park City, Utah, when he misses his landing on the difficult “double cork” just before the 2010 Winter Olympics. Pearce is airlifted to the hospital where he slips into a coma. His father Simon Pearce, mother Pia and brothers David, Andrew and Adam all fly from Vermont to be with him as he wakes up from his coma. Pearce faces a long road to recovery as he is faced with the many impairments that his crash has left him in. Luckily he is supported by his brother David who has had his own share of impairments stemming from his Down syndrome. The story follows the Pearce family as they try to support Kevin while pleading with him to be cautious of strapping into another snowboard. Though he is never able to ride again in the way that he used to, Kevin finds self-acceptance and a voice with the help of his family. The film opens in the early morning of July 23, 2007 with a 911 call of abank manager reporting that he had just received a call from Jennifer Hawke-Petit who withdrew 15,000 dollars in the hopes of saving her family, husband Dr. William Petit and daughters Hayley and Michaela, from being held hostage by Joshua Komisarjavsky and Steven Hayes in the small town of Cheshire, CT. Only Dr. William Petit would escape from the two men. Directors Kate Davis and David Heilbroner unveil the many facets of the murders by investigating not only the side of the Petits, but Hayes and Komisarjavsky by interviewing family and even Komisarjavsky’s serious girlfriend and looking deep into their pasts. The film ends with the sentencing of the two though it does not entirely offer closure for the families. Jennifer’s father, however, says, “I don’t think there will ever be closure for our family… If closure brings forgetting, then I don’t want that closure.” 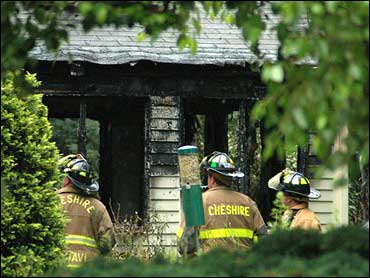 “Engaging documentary about a 41-year-old single woman’s adventure into parenthood.”

This documentary follows filmmaker Nina Davenport as she finally commits to her ten-year dream to become a mom despite the series of failed relationships to come before. She decides that she no longer can wait for a man to make her dream come true and sets out to beat her biological clock and have her baby on her own. Though she is faced with both quiet and outspoken skepticism from her family, Davenport not only decides to go through with her decision, but to film it along the way. After her baby boy’s birth, Davenport finds a group of “surrogate husbands” in her friends Eric, John and Amy. Though there are many bumps along the road, the film ends happily with Nina concluding her film by saying, “Why is it only when you’re humbled by being a parent yourself that you begin to realize what your parents did for you, and how much they loved you?” “Spotlights one of filmmaking’s unsung heroes- the casting director.”

The film covers the last fifty years of casting history, emphasizing casting directors such as Marion Dougherty and Lynn Stalmaster who pioneered a new way of casting by going with taste and gut instincts by rejecting the old Hollywood ways with its “cattle calls”. Dougherty gave stars such as Al Pacino, Dustin Hoffman and Warren Beatty their earliest starts in Hollywood. The New York Times confirmed her death in 2011 with her dear friend and the co-producer of Casting By, Margaret Whitton. Tom Donahue directs this doc that follows how Hollywood moved into the new wave of movie such as Midnight Cowboy, the Graduate, Butch Cassidy and the Sundance Kid and Bonnie and Clyde all thanks to the often overlooked casting directors.

“Candid interviews with ten American couples- captured in the comfort of their own beds.”

Director Phillipa Robinson says in the director’s spotlight for the ten documentaries, “I am really, really interested in people’s relationships and what love is about and how people’s relationships work.” She investigates the relationships of old, young, interracial and gay couples in the intimate space of their bedroom. She believes that the bed is the most intimate place, which would inevitably spark the most intimate conversations. These couples openly discuss sex, infidelity and love from the comfort of their own beds.