Sesame Street, the well-known children’s program has been on TV for over 40 years and in January, the show moved from PBS to HBO and debuted its 46th season. Sesame Street’s new season brought many changes including new sets, shorter episodes, and a new theme song.

Now, The New York Times reports that Sesame Street introduced its first Afghan Muppet called Zari and she’s on a mission! Zari will only be seen in the Afghan version of the children’s television show. Sesame Workshop’s expectations for the Muppet is that she will become a great role model for young girls in a country with a poor record of promoting equality for women. As the picture shows, she has bright and multicolored hair and wears a head scarf with her school uniform. The Afghan version of Sesame Street is called Baghch-e-Simsim which translates to Sesame Garden.

Zari’s name means “shimmering” and she’s a bubbly 6-year-old who will promote girls’ empowerment in addition to health and emotional well-being. Philip Toscano, the director of communications for Sesame Workshop said that the Muppet was developed after they did their research to find a character that would relate to the Afghan viewers. “We’ve been in Afghanistan for five years, Toscano said. “In our effort to create more content, and relevant content, this was a natural step in production.” Zari is the newest Muppet in the show’s lineup of international characters. Sesame Street has multiple original Muppets in Mexico, Germany, Bangladesh, Egypt, and many other countries.

The Afghan puppeteer who gives life to Zari is Mansoora Shirzad. 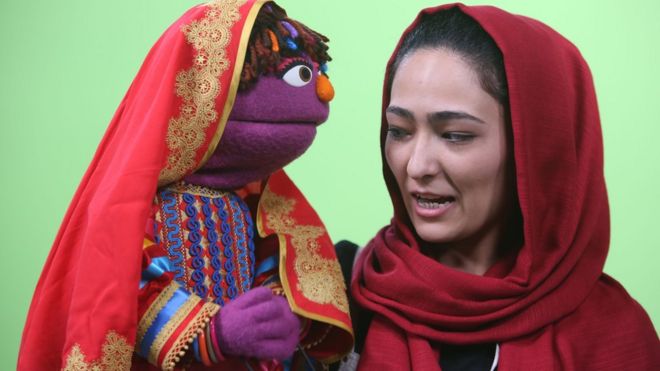 Ultimately, the new Muppet is a way for children of both sexes to identify with a bold young character. During an interview, Sherrie Westin, the executive vice president of global impact and philanthropy for Sesame Workshop stated “It’s a way of making sure we are not just teaching but we are modeling, which is very powerful,” she added “We know children learn best when they can identify themselves with characters on the screen.”

The United States State Department has assisted with funding each of the five seasons of the show in Afghanistan. The children’s show is produced in Kabul and features live-action films about the traditions and culture of life in Afghanistan.

Zari will make an appearance in each episode of the Afghan’s version of Sesame Street. We will see the Muppet speaking directly to viewers, interacting with children, and interviewing various professionals.